Get started by choosing your container. Think big—containers in the 20- to 25-gallon range work best. You might squeak by with a 10-gallon container for a single vine of miniature pumpkins, but bigger is better. If you’re unsure the volume of a potential container, look for ones that are 36 inches across. Some gardeners grow pumpkins in a typical 6-foot-wide plastic children’s swimming pool.

Unless you’re using a self-watering container, make sure your pot has drainage holes. Irrigation water should be able to flow freely from the container to avoid creating soggy soil. If your container lacks drainage holes, add them. Several smaller holes work better than one large hole.

Purchase a commercial, bagged soilless mix specifically recommended for container growing. When filling your pot, combine equal parts of this mix with compost. Work the compost into the bottom half of the pot. If you’re using homegrown compost, strain it to make sure you’re not adding insects to your container. They’ll most likely move in later, but as seedlings emerge, you don’t want insects munching on your plant.

The reason to add compost is twofold: first, to improve the soil’s ability to hold water. You can also add a single shovelful of good garden loam to the container, along with some water retention crystals. Both actions help the soil to retain water, which your thirsty pumpkin vine will appreciate.

The second reason to add compost is to enhance the soil’s fertility. Pumpkins have big appetites, and while compost helps take the edge off, so to speak, you should also mix slow-release fertilizer into soil prior to planting. Keep soil about two inches below the pot rim, and add a layer of mulch to help slow water loss from soil.

Sow 3 to 4 seeds per pot, and thin seedlings to one or two, depending on how large your pot is, once they have their second set of true leaves. If you can’t allow pumpkin vines to sprawl, build a sturdy trellis and train vines to it. Create some kind of sling to hold developing fruits. Many people use pieces of panty hose for this task.

Pumpkins have a huge thirst, so plan to water frequently. Fertilize every few weeks with a complete fertilizer containing trace minerals. Avoid over-fertilization with nitrogen, which yields vines with lots of leaves but few fruits. Pumpkins growing in containers can’t support a heavy fruit load. A full crop of miniature pumpkins should mature fine on a container-grown pumpkin, but for larger fruits, remove two out of three blossoms to limit fruit set. 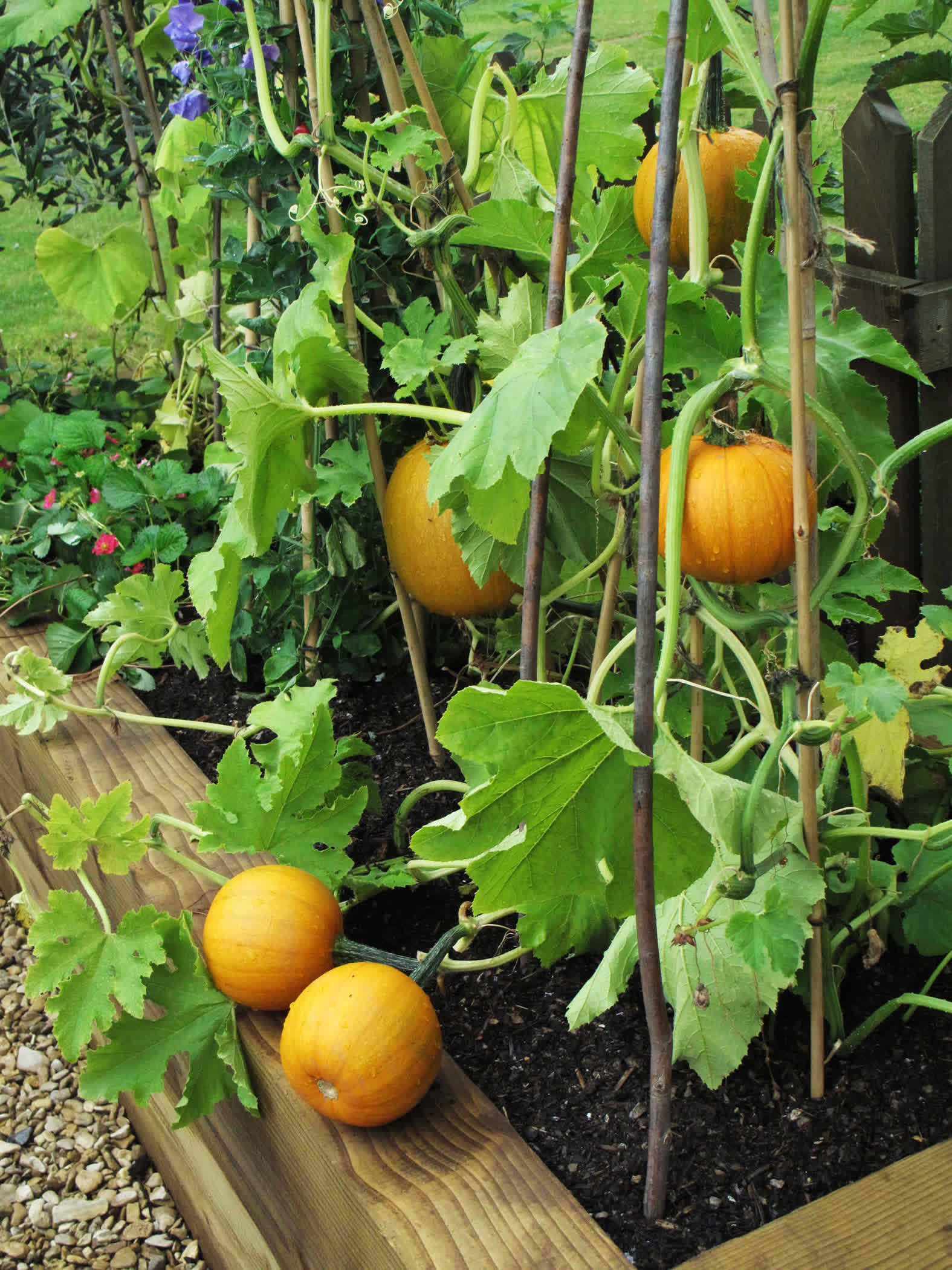 Growing miniature Jack B. Little and Baby Boo pumpkins takes up a whole lot less space. Many people grow them along fences, on trellises, or down from a balcony or deck.

How to Grow Jack Be Little Miniature Pumpkins:

JBLs take up far less space than Jack O'Lanterns. You can grow them on a trellis, or fence. You can even grow them in large pots, and let them hang down from your deck.

Plant them indoors, or sow directly outside in the spring. Like other pumpkin varieties, they are tender annuals. Plant after the last frost in your area.

If you have limited space, plant miniature pumpkins be a fence or trellis. Train them up to the fence. You can also grow them in large containers. The trick is to provide a large container, and to add lots of fertilizer and plenty of water on a regular basis.

Like all pumpkin varieties, many insects and plant diseases can affect miniature pumpkin plants. Apply organic insecticides and fungicides early, and on a regular basis.

Harvesting Miniature Pumpkins: Each plant produces up to 8-10 cute, little miniature pumpkin fruits. Harvest when they turn completely orange, and the stem has dried and turned brown in color. Cut the stem near the vine with a sharp knife. Be careful not to break the stem. Like larger pumpkins, the stem gives JBLs character.