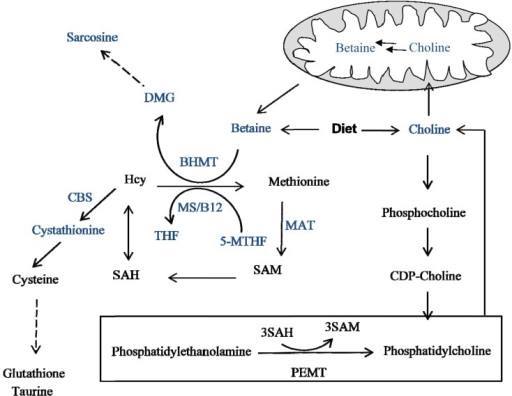 "This is probably the most comprehensive graphic I have ever seen, that isn't too difficult to follow. It also show the interaction of all the donors in the methylation cycle. So lets dive in.

This graphic focuses on the choline/betaine cycle, which I personally think is the bigger deal than the mtfhr system. Why do I think this? Because most people have only focused on the folate side of things, and think that all they need to do for their mthfr SNP is to take methyl folate(and for some people this may actually be all they need to do). However, here we can see the critical role that choline plays. I also believe that most American diets are both choline and glycine deficient. When these nutrients are missing from the diet, the body is forced to use up its methyl groups from the mthfr cycle. Why you ask? Because the liver MUST keep cranking out phosphatidyl choline, also known as lecithin. Why must it do this? Because lecithin is needed in the manufacture of cell walls. Note that in the bottom box of the graphic it takes 3 SAM to convert phosphatidylethanolamine, into 1 phosphatidyl choline (think of this as requiring 3 methyl groups). The liver is dependent on the mtfhr enzyme to convert homocysteine to methionine to SAMe for these methyl groups. So you can see how people with compound heterozygous mtfhr or homogyzgous c677t get into trouble as they have about 60-70% less methyl groups than people who don't have these SNP's. So the liver has no choice but to convert choline into betaine (TMG) and use the bhmt enzyme to convert homocystine into methionine. Doing so is good and proper but I think you can see that without enough dietary choline, the body won't have enough to make phosphatidyl choline and do methlyation-you end up with the tiger chasing its tail.

So the answer is to take more methylfolate and methy b12 right? Probably not, due to likely SNP's in COMT. Taking methylfolate and methyl b12 will ramp up mthfr yes, but it will ALSO ramp up COMT and for some people with certain forms of the COMT snp this is bad news, especially the methylb12. some people with MTFHR and COMT in fact will do better on regular old folic acid-shocking I know.

I am a big fan of taking lecithin, and I think if you read the the above and see the graphic you will see why. Lecithin IS phosphatidyl choline. Soy lecithin also has lots of the phosphatidyl ethanolamine substrate, as well as phosphatidyl serine and phospatidic acid which are all usefull as well. Plus lecithin gives us linoleic to linolenic acid in a 4-1 ratio which is about ideal for human health.

Amongs other amazing benefit, choline is ALSO needed to form ldl cholesterol, which is the only way fat is exported out of the liver. Rats with choline deficient diet ALWAYS get fatty liver disease. MTHFR Snp can produce choline deficiency as mentioned above. 30% of Americans have fatty liver disease. Roughly 20% of people have a MTFHR snp. They are the most likely to get fatty liver as they simply need MORE dietary choline than someone without this SNP. All food sources of choline are as phosphatidyl choline, due to the cell wall thing. Eggs and liver are the best sources. This is ONE reason why a vegan diet is not a good lifestyle for someone with MTFHR. The other big reason is the issue of methionine. Methionine is the amino acid that is substrate for all the methylation in our body. We cannot make this amino, we need to get it from diet. Plant protein is a poor source of methionine (but a good source of lysine, also important). Animal meat is the best source of methionine. One can also take a methionine supplement, but do this with caution as it can push one into overmethylation. Betaine (TMG) is made from dietary choline that the body doesn't use for cell wall synthesis. This will also convert homocysteine to methionine. The metabolic fate of TMG is to lose one methyl group and become DMG which is in turn converted further into sarcosine which can store methyl groups. When sarcosine builds up, it is peed out. This is why dietary betaine and glysine are so important. For mtfhr people I recommend 400 mcg to 600 mcg of methylfolate per day. Best dietary sources are liver, legumes and leafy greens such as spinach. 500-1000 mg of choline per day, preferably from eggs or lecithin or liver. 90 grams of protein per day minimum. (whey protein a good source) optional is to take betaine directly no more than 500 mg per day for most people. betaine can ramp up methylation too much in some people. dietary sources are wheat bran, spinach, quinoa. 3-5 grams of creatine which reduces the body's methylation burden. I personally do ALL of the above. I have eggs with liverwurst 3-4 x per week. I have two tablespoons of lecithin every day, and I add about 1/4 tsp of betaine to my smoothie. I also get about 150-180 grams of protein per day. I eat a vast tub of spinach from Costco every week along with several cups of steamed veg per day. I feel better than when I was 20 . No kidding. Now, one can ALSO have SNP in the BHMT enzyme, and MAT enzme, but that is for another day. "